There are two things I most definitely can’t live without today; my laptop and internet on the go. Therefore you can imagine my devastation when the  phone I so cherished for over 3 years was stolen barely three weeks ago, and with it effectively slaughtering my on-line presence out of home and office, much like you would that turkey or chicken over Christmas. Nonetheless, this didn’t deter the 2011 holiday season from being nothing less than magical, all thanks to three sterling ingredients: my twitter family, @kenya_tweets and @nightingaleMSA.

By now you’re probably wondering what made this past festive season so sensational for me… Well, let me begin at the alpha… Over a light chat at @thenailab, my long time buddie @amasy tilted his laptop toward me and showed me this twitter competition that was going on, about #KOTxmas, @kenya_tweets and @nightingaleMSA. Now, Kenya Tweets is the foremost and arguably most comprehensive website that acts as a database and research tool for all Kenyans on Twitter (popularly known as #KOT). They recently re-branded their website and decided to do it in a unique way, by giving a lucky #KOT, alongside a plus one of your choice, a  stay-expense paid chance to usher in 2012 at the luxurious Nightingale apartments at the North Coast of Mombasa over the night of 31st Dec 2011.

Being the opportunist that I am, everyone should be come to think of it, I got to mobilizing the fantastic followers I have on twitter, pleading with them to vote for me. All one had to do was muster up the most nominations by simply getting as many tweeps as possible to nominate you, including the terms #KOTxmas and @nightingaleMSA which is the twitter handle for the apartments. I must say it was a cut-throat close to three week affair which near to its culmination had @amina_baby, @maloba, @hotlivia and myself fighting for the prize.

You have to realize at this point I had to maximize my on-line time for the nominations hunt, which would explain why I was offline from the evening of Thursday the 29th to Friday around noon. Friday morning I got up to a call from my boy @bobbysyoks ecstatically telling me that I had definitively won the contest at that @kenya_tweets was frantically looking for me. Shortly after, surely enough, I got that ‘winning’ call and rushed for the @ihub where I was going to finish up some reports and do some work anyway. Logging in to twitter I pleasantly found this, among hundreds of other mentions and congratulatory tweets:

I replied all the necessary DMs  and ‘virtual paperwork’ (non-existent really) and 31st found me, and my mother, on our way to the coast for this experience. Now, I hadn’t been to the coast in two years and I was expectedly exited to be back. Modern Coast touched down in Mwembe Mombasa in the evening, and stepping out of the bus proved to be rather welcomingly hot and humid affair. We had a whiff of some roadside mshikaki and didn’t mind having a taste whilst we waited for the escort  organized by @nightingaleMSA to pick us up from the drop-off. It was however particularly interesting to see numerous Nairobians, some of who I knew, resplendent in nothing more than their undies, vests et all, parading the intricate network of narrow streets that characterise the tourist haven that is the coastal capital.

Mombasa is a totally different mind set from the capital city. Things here seem to happen on a perpetually leisure go-slow and there is definitely something in the air that dangerously encourages wanton spending. Its an intoxicatingly deadly mix that is carelessly unavoidable but incessantly necessary to keep pace with the ‘coastal lifestyle’ that so many Kenyans have come to ritually accept. As I made all these observations, the kind sir, Jackson, came to pick us up, heading down past Bamburi’s Haller Park and the consequently traffic prone Nakumatt Nyali area. The traffic we witnessed here was messy, mostly holiday lovers and concert-goers making haste to the merry.

The dusty maroon gates that Jackson hooted on did not prepare me for the beauty that is Nightingale Apartments. We glided in and beauty simply took my breath away.

The lovely and lit 2.9m deep pool seemed to seductively beckon me to sample it, being a competitive and free-time swimmer for most of my life, as a makuti bar and restaurant area gave the compound a feeling of authenticity. I could see some of the patrons sauntering with satisfied visages throughout the minimalistic but expansive area, from the pool area to the apartment blocks which were to the  right. The receptionist, Waithera, welcomingly smiled and ushered us into the waiting lounge as we checked ourselves in, all the while the Director, Catherine Sell, took her time to get to know both ‘mama twitter’ and myself. By now you know the name she had christened me during the entire stay. 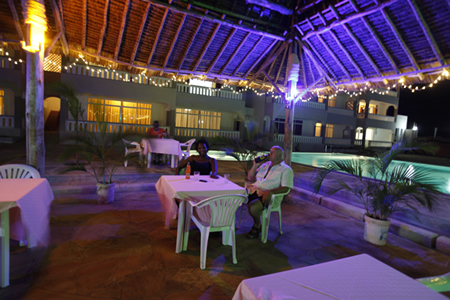 The 'traditional' restaurant area next to the pool

Our apartment was situated in Block B, with a quaint balcony that overlooked an expansive area leading upto the beach, though the primary horizon happened to be the pool which I couldn’t wait to dive into. Inside the quarters was a pleasantly furnished granite-laced space. To my right was a simple yet fully equipment-stocked kitchenette, and the main area of the living room had tastefully upholstered sisal couches and a conveniently placed television set with what I call all the DSTV essentials, Supersport 3 and 7, Mnet and the local channels.

View from the balcony of the apartment

The bedroom was affectionately prepared with white light cotton sheets, drawer and cabinet space, a mirror and a more than genrous back view of the area which is undergoing development. I couldn’t help but smile to myself as I dropped my luggage and took it all in … This was going to be a truly non-forgettable holiday…

The Celebratory Tragedy
The period may have been sombre, the trials rather troubling and the experience definitely unforgettable but the outcome was nothing anyone, least of all myself, would have expected. It was a time when my tears flowed freely and unabashedly and when my emotions bubbled over like the raging waves of a burst dam…furious, consuming, destructive and effective in its mission, to make me feel worthless and worn.

My mind was like the sky on a rainy day, dark and tumultuous, sweeping and unpredictable. My heart was the ocean, vast and endless in its capacity, yet exploited and polluted by the filth of experiences and hurt and pain. My body was but an enigma…existent yet dynamic, vibrant but temporary and my soul was clay; malleable, adhesive and weak.

At this funeral, there were no white lilies or crimson roses…shades of black and deepest sorrows were non-existent. The eulogy was short and concise, no flowery vocabulary or praises and thanksgivings…there were only regrets and apologies, reconciliatory statements and promissory notes.
The other strange thing about this funeral was an attendance of only one…myself. But then again, if you put into consideration the purpose of the funeral, you’ll figure out why it turned out the way it did. It all marked the end of an era and the beginning of a new one…a celebration of life and an appreciation of death.

It was the murder of Loneliness…and the culprit was Love.

Heres one of the most memorable notes I ever saw…

The Geography of a Woman
————————
Between the ages of 18 – 21 a woman is like Africa or Australia. She is half discovered, half wild and naturally beautiful with bushland around the fertile deltas.

Between the ages of 21 – 30 a woman is like America or Japan. Completely discovered, very well developed and open to trade especially with countries with cash or cars.

Between the ages of 30 – 35, she is like India or Spain. Very hot, relaxed and convinced of its own beauty.

Between the ages of 35 – 40 a woman is like France or Argentina. She may have been half destroyed during the war but can still be a warm and desirable place to visit.

Between the ages of 40 – 50 she is like Yugoslavia or Iraq. She lost the war and is haunted by past mistakes. Massive reconstruction is now necessary.

Between the ages of 50 – 60 she is like Russia or Canada. Very wide, quiet and the borders are practically unpatrolled but the frigid climate keeps people away.

Between the ages of 60 – 70 a woman is like England or Mongolia. With a glorious and all conquering past but alas no future (a bit like Tony Blair, maybe Blair’s a women really).

After 70, they become Albania or Afghanistan. Everyone knows where it is, but no one wants to go there.